tour of this property 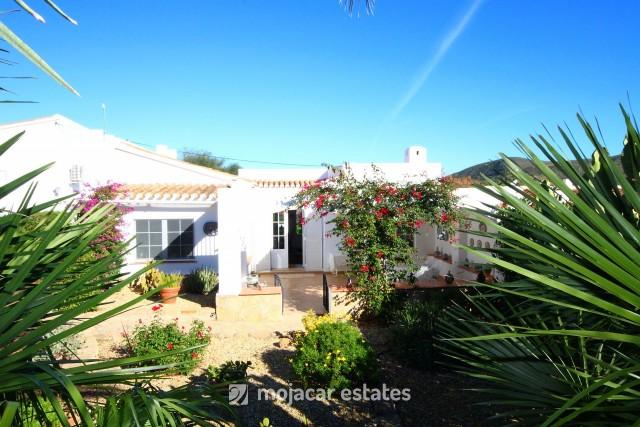 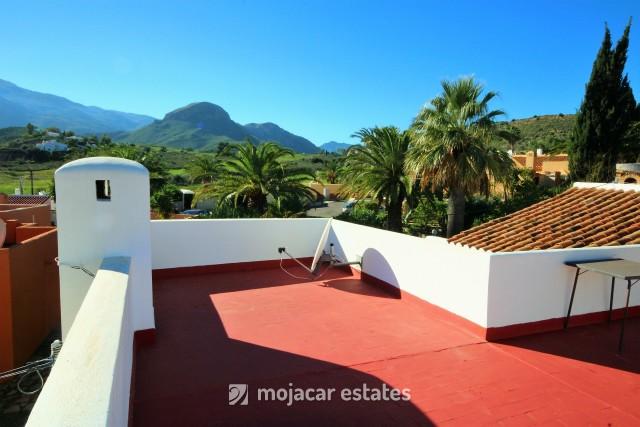 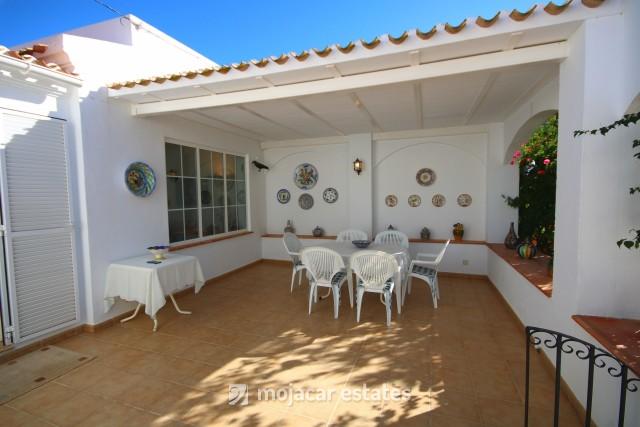 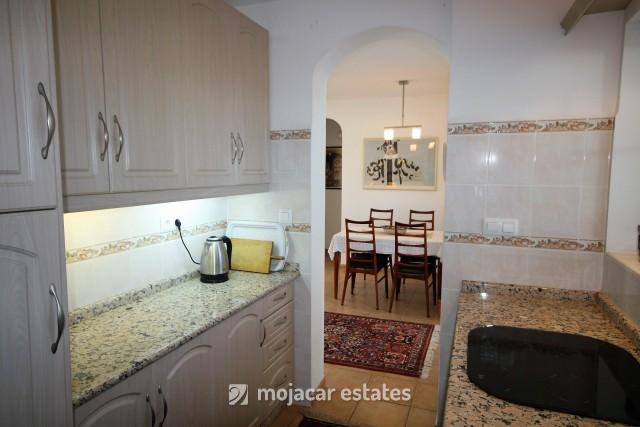 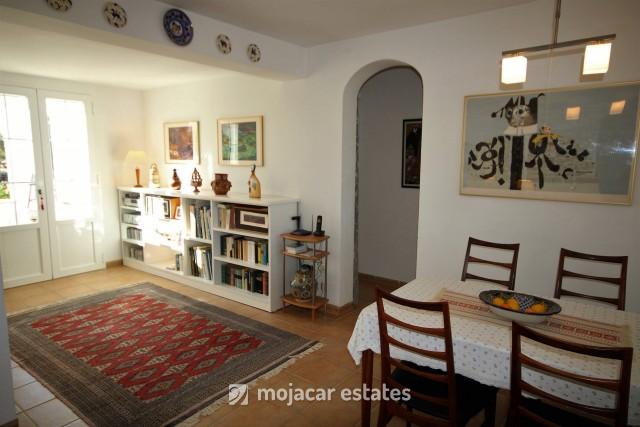 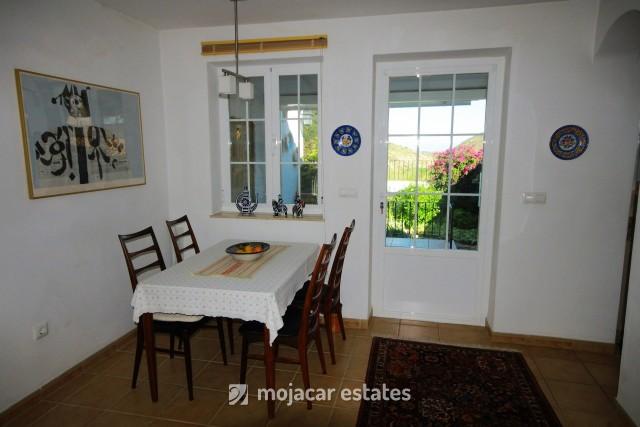 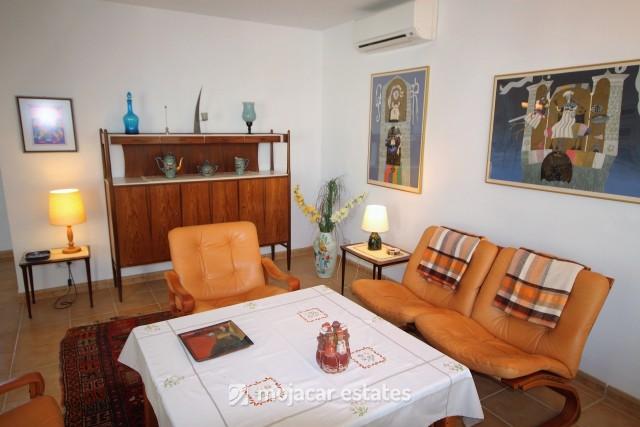 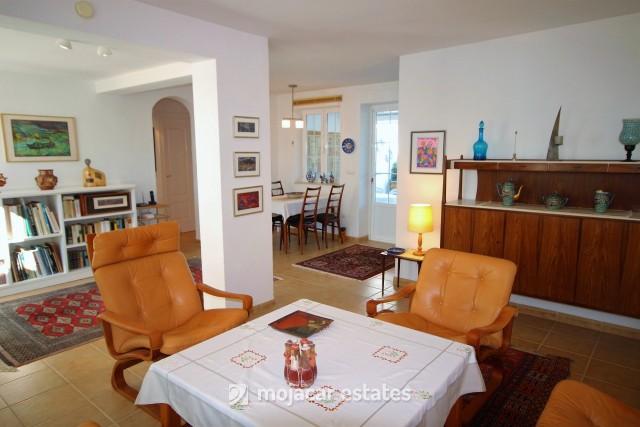 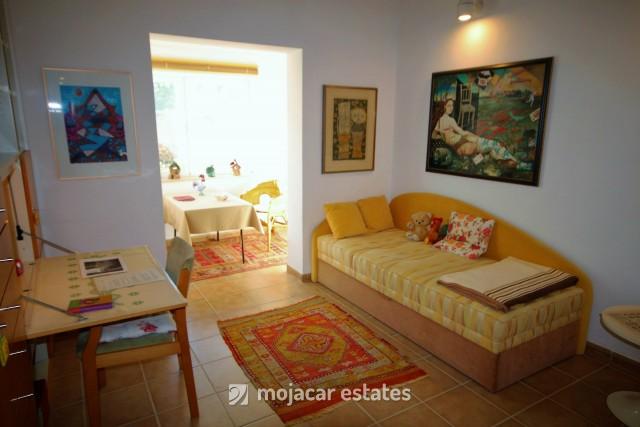 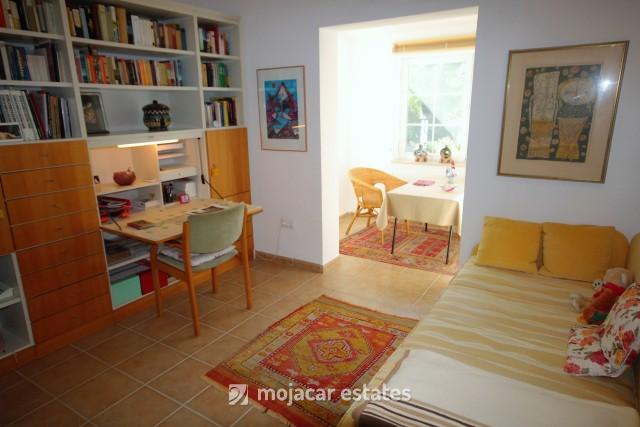 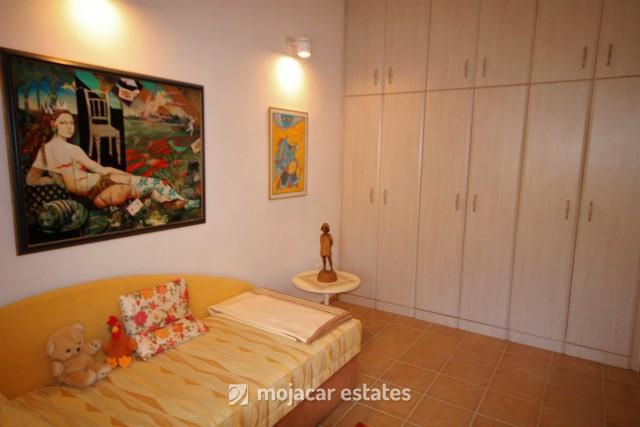 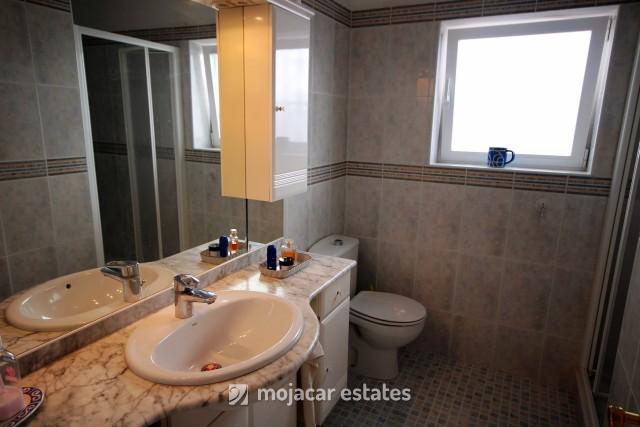 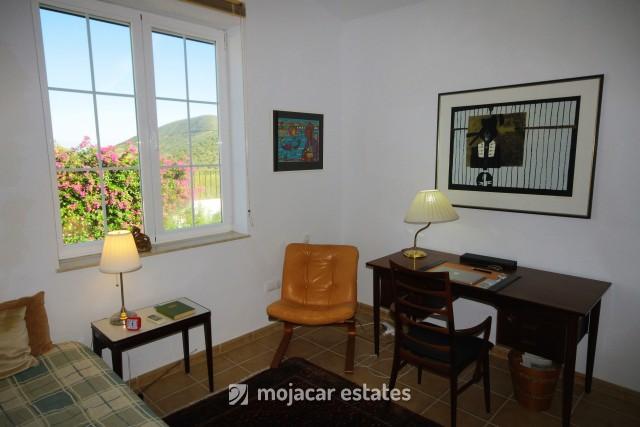 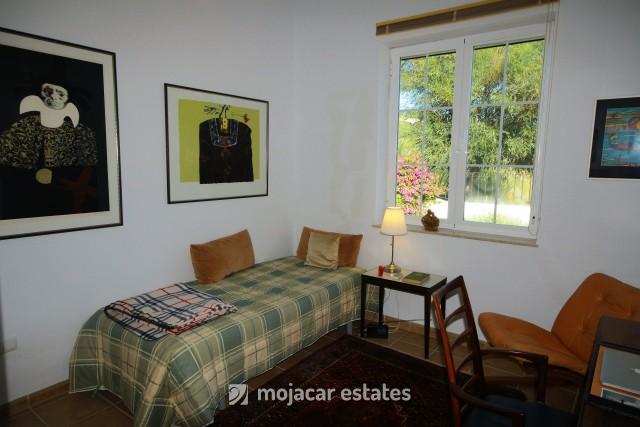 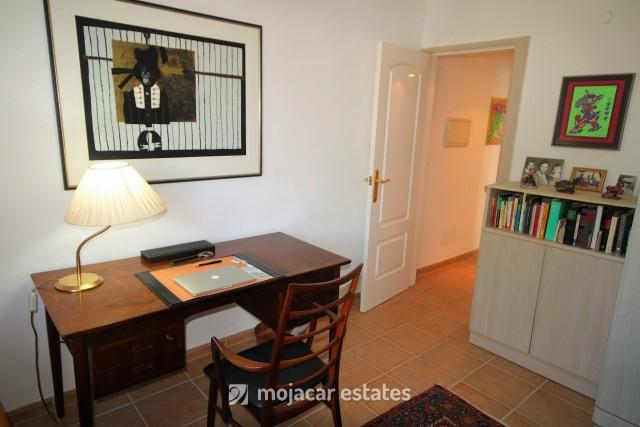 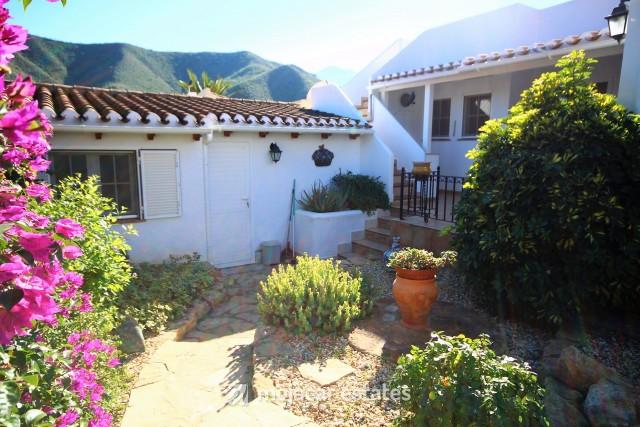 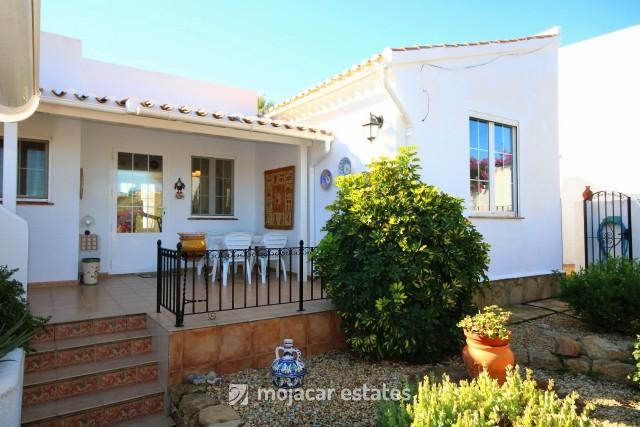 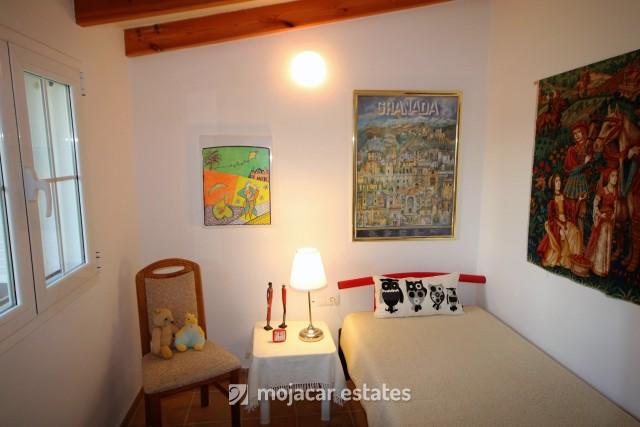 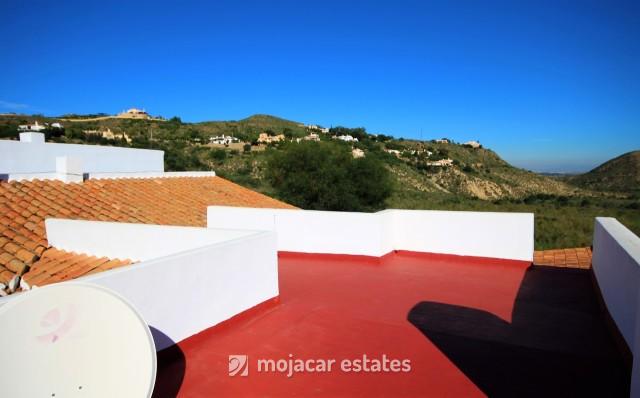 The house is furnished and decorated to a high standard .

Jardines de Agua is a small urbanisation of bungalows in the centre of the valley with many permanent residents .There are 2 restaurants in the valley and the possibility to play Boccia. Turre Village is only a 10 minutes drive away. Turre has supermarkets, restaurants, bars and a very popular market once a week. There is a health centre, a dentist, physiotherapist, hairdressers and a gym as well as local police, fire brigade, school and Kindergarten. Mojacar Coast with beautiful beaches is only 10 minutes drive from Turre.

In Cortijo Grande a small road leads you into the heart of Jardines de Agua where you can park your car on a private parking space in-front of the house. The house has a front and a back terrace of 26 and 16 m2 respectively, both partly covered with proper roofs and both offer excellent areas for outdoor meals in summer and winter. The front terrace has views onto the mature garden with palm trees and other indigenous plants all arranged on gravel terracing ( There would be space for a small pool ).

Entering the house from the front or back terrace you come straight into an open plan sitting /dining room of 35 m2 with access to the kitchen on one side and the bedrooms on the other. This living area is very luminous with fabulous views out on both sides to the terraces, gardens and countryside.

A hallway takes you to the spacious front bedroom which was extended by a sun room, like a conservatory, big enough for a table and two easy chairs. Along one of the walls of this bedroom are fitted wardrobes up to the ceiling and along an other is a multi functional bookshelf with drawers, closed parts with doors and a desk for writing and reading. There is a family bathroom with a big walk in shower. Next door is another toilet and basin.

Further along there is the second bedroom with a big wardrobe as well. Through a large window you look out to the back garden, fenced in by iron security railings and walls, that separate the property from the natural countryside beyond. From the back terrace a staircase leads to the roof terrace from where you canenjoy the beautiful 360° views to the hills, mountains and the valley itself. All connections for cold and hot water as well as for electricity are preinstalled here for a possible future solar hot water preparation system.

Below the staircase there is a little room for the washing machine and a cupboard for shoes. Walking down a few steps you reach an extension/ annex of 16 m2 with a bedroom / study and a utility room with a lot of storage capacity.

The present German owners have reconstructed and enlarged the villa to a very high standard in 1998/ 99. Bathrooms and kitchen were newly tiled, fitted and furnished. All floors - inside and out - are newly tiled. All electrics, including the main connection line and fuse system, as well as all plumbing, were newly installed. The wooden windows and main doors were replaced by modern aluminium ones ( thermo bridge system ) with double glazing ( the outer panes are of safety glass ) and roll up mosquito netting introduced. The inside doors were renewed as well.

The fireplace in the sitting room was removed, however the chimney is still there and has just been closed off by a thin wall. A new fireplace or wood burning stove could easily be built again. All rooms have air-con. All roofs and terraces are drained by gutters and connected to a rainwater collection pipe. A new 3 chamber septic tank was introduced.

The property was always well maintained and is in a very good condition.

NET PRICE: 147.500 €
PURCHASE TAXES: 11.800 €
NOTARY FEES - APPROX.: 700 €
LAND REGISTRY - APPROX.: 370 €
TOTAL PRICE: 160.370 €
Price valid until sold.
Conveyancing not included.
The rates applied are the highest, and the buyer may, due to their characteristics, benefit from some tax deductions. The property A. I. D. is available at our office according to the decree 218/2005 of 11 of October that regulates the information regulation for the consumer in the purchasing-selling of property in Andalusia.

Location
On the above Google map click on enlarge map and the exact location of the property in Cortijo Grande is marked with the pin. Cortijo Grande is a very picturesque valley at the foot of the Sierra Cabrera with around 200 properties that date back from the late 70's & early 80's. Distance to village centre: 5.5km and approximately 4km to Cortijo Cabrera.